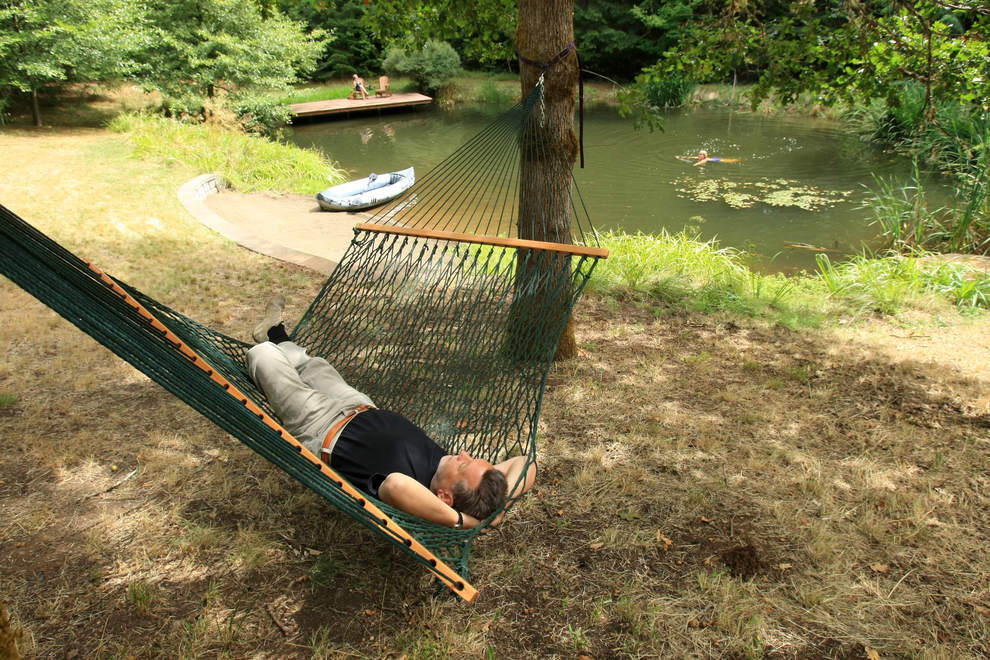 Rainy days add up to summertime fun for Jackie Robertson.  She has a pond on her country property south of Eugene that collects rainwater. Lined with clay to prevent leaks, it’s where she and friends swim, sunbathe, glide a kayak and soak up a wetlands solitude bustling with blue dragonflies, warbling birds and squiggly salamanders.

Evenings bring chorus frogs and battalions of bats on mosquito patrol.  “Oh, I love it,” says Robertson, a landscape architect. “There’s so much that goes on by the pond that doesn’t happen in other places because of the wildlife that show up.”  “One day I was in shock,” she thinks to add. “I was just lying there being lazy. Somehow or another, because I was so still, a blue heron didn’t realize I was a threat and landed on the dock 6 feet from me.”

But this 100-foot by 60-foot pond wasn’t always such a natural oasis.  When first dug out by previous owners, it had a narrow patch of land jutting into the middle, likely because a backhoe had sat there while excavating the pond into a horseshoe shape.  But the problem with the peninsula was that it created growing room within the pond for self-populating plants. Cattails, wild roses, sedges and rushes infiltrated the peninsula’s shallow-water shelf and began making their own soil.  “So what ended up happening, the pond started disappearing,” Robertson says.

She decided to start over.

A contractor, Dennis Cole of Dennis Cole Excavating, formed the pond into an oval shape, 9 feet deep at the center. “When we did that, we also planned for most of the sides to be quite steep, and that was so the vegetation couldn’t walk in very far,” Robertson says.  Next she had Rexius line the pond with 50-pound bags of bentonite clay sourced from Eastern Oregon.  When the clay gets wet, it swells and plugs leaks.  “You have to line the pond, period,” exclaims Robertson, who, along with Justine Lovinger, owns Lovinger Robertson Landscape Architects in Eugene. She chose clay for a balanced ecosystem and long-term ease of care, but says a synthetic or even concrete liner also would have sufficed to seal the pond.  For the safety of kids, pets and wildlife, a little beach breaks up the pond’s steep rim. Kids play on the beach, made of compacted gravel topped with sand, and the shallow water provides a quick exit for wildlife in over their head.

Concrete piers for the swim dock escalated the pond’s cost, which Robertson estimates at $25,000 when including the value of her own work and expertise.

Flat ground works best for most ponds, but it’s sloped topography within a perimeter of firs, cedars, Oregon ash, vine maples and bigleaf maples that channels rainwater into Robertson’s reservoir.  A spillway directs overflow back into the terrain’s natural drainage. Without a spillway, Robertson notes, overflow would erode the pond’s earthen dam.  She would welcome a little creek or spring for water supply, but warns that many waterways carry protections for wildlife and people irrigating downstream.  “Before you build a pond at all, the correct thing to do is talk to the Water Master,” she says in reference to the state Water Resources Department.  In fact storing water of any kind requires a permit from the state, unless it’s runoff from an asphalt driveway, rooftop or other impervious surface, says Scott Grew of the Water Resources Department.  “All water is owned by the people of the state of Oregon,” explains Grew.  Before excavating a pond to store water off the land, he says to call the department at 1-503-986-0800.

Hot summer days can evaporate Robertson’s pond at up to a quarter-inch per day. “So that’s another reason to try to have less surface area compared to depth,” she says. “The shallower ponds are going to disappear faster than a deep pond.” (Refilling a pond with well water also requires approval from the Water Resources Department, Robertson notes.)  But other forces of nature help keep the pond clean.  During winter, the pond’s surface temperature turns colder than water below. Quite suddenly, an “upwelling” will cause warmer water below the surface to rise, while the colder surface water sinks.  When the bottom water rises, it brings the mud with it and clouds the pond, Robertson notes.  But come summer, the reverse happens: water on the surface heats to the point where colder, muddy water sinks back to where it started.  “So literally my pond was muddy a week ago, and now it’s clear,” Robertson says. “It just flipped in a week.”

Natural ecosystems around the pond, especially vegetation limited to shallow water, will foster beneficial organisms to control mosquitoes.  Shading from trees and keeping the pond’s bottom free of organic matter, such as leaves, help to limit algae blooms and water weeds.  When she must treat an algae bloom, Robertson uses a powder called GreenClean.

“One should not be disheartened if for the first two or three years (after digging a pond) you have to fight with algae,” she says. “You can’t expect a full, natural biotic system to redevelop right after you have (excavated). After a while things will start to balance out.”  So long as it keeps raining, of course.

Anytime water is stored from off the land, such as from a stream, spring or even rainwater, a permit is required from the state of Oregon’s Water Resources Department. For information call 1-503-986-0800 or see www.wrd.state.or.us.

When to Give Up on Damaged Plants?

Way back in February, there was a record ice storm.  Trees bent to the ground, shrubs flattened, buds coated in ice looking like candy confections....  Hopefully you were smart enough not to get rough with your plants trying to help them clear the ice, and you didn't panic to try and help them upright right after.  But now it is spring.  All those bent over trees are reaching again for the sky, and the flattened shrubs are back up and shooting out new growth, but the hidden damage is finally showing.  Is it best to try and nurse your favorite plants back to health or give up and start over?

Here in the southern Willamette Valley in Oregon, we had a rare winter of extremes.  Our maritime climate was turned twice on its head with record breaking low temperatures.  The first was really early in the winter before our trees and shrubs had relaxed into dormancy. The second included temperatures in the single digits in February, far below our normal coldest winters, and topped off with a half inch coating of freezing rain that held for 3 days.  We are in a very temperate zone 8 here, and are accustomed to enjoying plants that hail from near the arctic, all the way to the Mediterranean.  It has been fascinating to see what failed, and what has come back.  Most deciduous shrubs and trees know how to prepare for the cold.  They pull their saps back within their thick bark, shed their tender leaves and go to sleep.  Our tall conifers drop their branches to their sides and let the snow and ice slide to the forest floor.  Most of the perennials sacrifice everything above ground routinely each winter, counting on the soil to protect the life force in the roots.  It seems the most vulnerable plants have been the broad-leaf evergreens who normally thrive in our wet 40-degree winter days, preparing flower buds for early spring blooms.  These guys really suffered.  The Sweet Box (Sarcoccoca confuse), the Star Jasmine (Traechelospermum jasminoides), and even the David’s Viburnum (Viburnum davidii) – all reliable long lived plants here - died slowly from the tips toward the trunks, and the cause was long vertical splits in the bark caused by freeze. Branches turned black and hard.  Poor things, they lost the continuity of the vessels that carry nutrients and were left open to disease.

So obviously, those branches aren’t going to recover.  Step one.  Prune them back to a healthy branch or leaf node and see if they bud out in the spring.  Step two, spring has arrived and either you are amazed at how your poor shrub is sprouting from the base of the still healthy branches, or it has obviously just not made it.  But what to do if it is a third alternative and it’s trying hard, but still looks pretty crummy with the graduation party quickly approaching?  Before you rip it out, check in with the nurseries.  They had the same bad winter!  Is a replacement even available that will make you happy?  Remember however the advice that I received one year from a trusted landscaper.  A temporary blank spot in the garden is far more attractive than a near dead specimen.  Sometimes you have to let go of an old attachment to make room for a new adventure!

Ways to Get Started With an Ecofriendly Landscape Design and Garden

Living in the scenic Pacific Northwest, we are surrounded by a lush environment that is the habitat for many native plants and animals. Keeping our environment free of toxins, encouraging native plant diversity and reducing waste are a few common concerns for Eugene, Oregon gardeners. When incorporating gardening into a landscape design, it is difficult to balance beauty with ecological concerns. Below we have a few tips so that you can do both.

Plan planting based on botanicals that naturally grow in the region so they will be well suited for the climate and are less likely to need fertilizers and pesticides.

Keep plants that love sun in sunny areas and shady-loving plants in the shade so they will do well and there will be less upkeep.

Water in the morning. Not only will this be more economical so that water doesn’t evaporate before it is able to soak into the ground and reach the roots, but it also is supposed to eliminate some diseases that need moisture and can’t survive in the heat of the day.

Make or buy natural pesticides made from garlic, chili powder, cloves or eucalyptus, which pests do not like.

Use a natural pesticide like horticultural oil. A commercial brand like Pure Spray coats insects with oil and suffocates them. It doesn’t harm birds, bees or the plants.

For a natural fungicide, try baking soda. Or for a commercial brand, try Green Cure.

Boiling water can be applied to weeds if other plants are not nearby like between stones.

Planting flowers that yield nectar will increase healthy or beneficial insect populations, which will in effect reduce pest populations.

Investigate whether materials like wood in a fence or deck are sustainably sourced (wood certified as sustainably harvested by the Forest Stewardship Council).

Collect water with a rain barrel.

Buy local. Using local products and services cuts down on the distance of travel, which reduces greenhouse gas emissions.

Purchase post-consumer or post-industrial materials that can easily be recycled later.

Use recycled materials. Flooring and even paint can be recycled and reused. Buy used flowerpots and planters instead of new.

Reuse salvaged materials. Whether you find these materials locally or online, they are good for the environment—and your pocket.